A long carrier wave for China?

…to such an extent that its leaders, strengthened by the multiple disturbing events taking place on the international scene, are now openly convinced that the West is heading for a structural decline. This posture is in sharp contrast with the country’s long-lasting tradition and culture of ¨low profile¨.

Whatever the American presidents say, times are changing and so are the power relationships. One question that agitates geo-politicians is whether President Xi is in the process of committing a sin of vanity? He openly multiplies destabilizing political and military initiatives. He attracts international capitals and prepares the emergence of an omnipresent Yuan in the payment of transactions in raw materials and modern (e-Yuan).

Despite China’s predilection for the long haul, the answer may well come in the next couple of years

A – déjà vu – Paragon of virtue

In the end… Didn’t the infringements of individual freedoms in China, so decried by the West, make it possible to curb the virus and avoid, in the end, the long privations of confinement?

For a couple of decades, Western doomsayers predicted that China has been on the verge of a banking system collapse, a burst of its property market or a civil war. In practice, Beijing has proved totally unscathed from the Dotcom bubble, the Great Financial Crisis, the Euro sovereign debt crisis and from Covid-19.

Its economic central planning has allowed to apprehend and manage-well looming crisis. During the past years, contrarily to most Western countries, China has the luxury of not resorting at all to monetary gimmicks such as quantitative easing or monetization of government debt. No competitive devaluations, the Yuan is outperforming the major currencies. No need for ZIRP or negative interest rates; Chinese bond markets are draining global flows thanks to positive (decent!) real returns.

China’s outperformance reached a likely climax in a Covid-2020 year, when its economy soft-landed, while world growth collapsed. Of course, China has mastered the pandemic brilliantly (?), which has allowed it to keep its economy almost intact. But it also benefited from a temporary substitution effect: its factories were fully operational to produce goods (medicines, electronics, etc.) that could not be made elsewhere because of the confinements. By H2 2021, this substitution effect is going to wane, rapidly.

China remains obsessed by its over-indebtedness. China’s resolve to cut it and reduce financial risk has proved persistent despite the trade war and pandemic shocks. The recent rise in bankruptcies and bond defaults – as featured by local state-owned enterprise defaults – indicates a retreat from the former implicit government guarantee policy. Beijing has also tightened control of the fintech platforms and acted to curb P2P lending. It is also putting a clear and sustained lid on the shadow-banking system that has fueled risks of property bubbles. 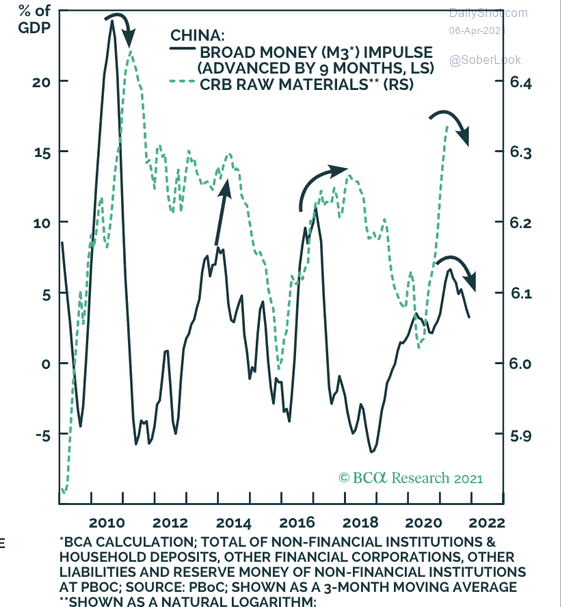 Policy support has shifted towards the new sectors such as technology, services and consumption upgrading, instead of massive reflation. Despite solid GDP numbers, Chinese household spending has been weak. In short, China’s growth has been essentially supported by… the rest of the world. 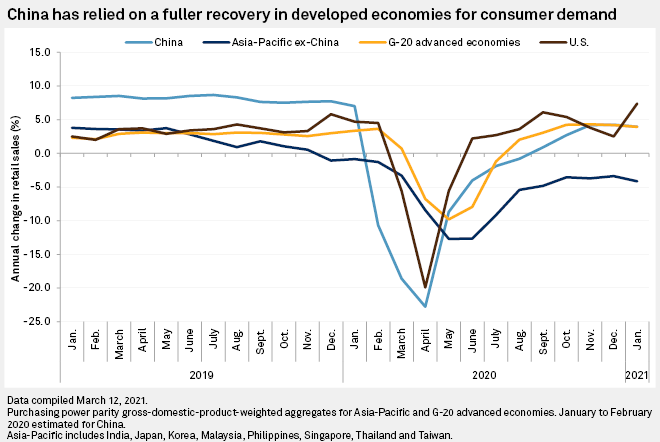