Despite this outperformance, things have occasionally gone wrong

Recent events have reminded high yield investors that it does not come without risk. Defaults have mainly been concentrated into the retail and energy sectors. Retailers have failed to adapt to the online competition and low margin environment. Big names like Debenhams, New Look or Rallye have bankrupted. The energy sector has been the dominant sector, accounting for more than half of defaults. The most notable defaulter was PG&E. The energy sector is the bottom performer. In contrast to the HY universe, energy sector spreads have widened, which might come as a surprise considering that the oil price is up and trading above breakeven levels for many oil players.

Having a single asset exposure, like energy companies, can be fatal. Bond investors need to remain careful. Thankfully, these default cases are the exception rather than the rule.

However, some pockets of stress are emerging. The Fitch 50 index provides a look at debt structures and credit profiles for 50 prominent US leveraged issuers. Its members have a total debt of $500bn. Their median leverage was mostly steady at 5.9x over the past year. However, median interest coverage sharply declined to 2.4x from 3.3x, reflecting higher rates and a lower cash flow generation.  Furthermore, downgrades have recently spiked and surpassed upgrades by a ratio of 5 vs. 1.

In addition, the portion of bonds trading at distressed levels, i.e. with a spread higher than 1000bps, is on the rise. The number of those bonds has increased by 63% over the past 12 months. This tends to be a good leading indicator for future defaults. 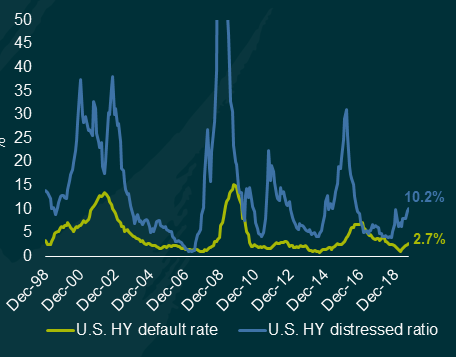 S&P is expecting a rise of the 12-month trailing default rate for the HY issuers to roughly 2.8% by mid-next year. This level would be roughly half a percentage point higher than the current rate, representing a reversal in the gradual downward trend experienced since mid-2017.

Nonetheless, this forecast is still slightly below the long-term average default rate. According to S&P, in an optimistic scenario the HY default rate would be stable, while in a pessimistic one it would climb to 3.5%. The negative credit outlook for HY rated issuers is on the rise too. Bond investors are currently witnessing an increasingly two-tier market. Those that can borrow cheaply and benefit from the low interest rate environment, and those falling out of favor which are locked out of the market.

The recent ECB announcement to  restart its  purchasing program has already drained huge amount of cash into the asset class. So, a more cautious approach prevails.